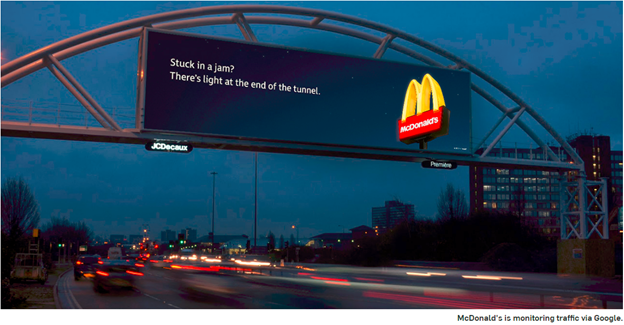 In a watershed moment for DOOH advertising, McDonald’s ran an ad campaign where the creative messaging was changed at various times of day, as directed by real-time Google Traffic Data.

The unique UK roadside campaign targetted the evening commute and the creatives changed based on the speed of the traffic. During fast flowing traffic, McDonald’s used simple visuals of popular menu items to drive impulse purchasing. As traffic slowed and congestion increased the creative changed to run relevant copy lines, such as, “Stuck in a jam? There’s a light at the end of the tunnel.” Lines designed to resonate with customers and create a sense of connection.

The campaign showed the possibilities of DOOH advertising. By broadcasting a relevant message at an appropriate time to a geo-targetted location, McDonald’s increased its chances of reaching customers at their most receptive.  The logic being that it’s easier to direct a bored, hungry customer already on the road to head to a nearby McDonald’s, than it is to convince them to leave their home and head to the fast food chain.

As Katie Parker, Head of Marketing at McDonald’s, said, “This data-driven digital OOH campaign uses traffic speed to contextualise copy, reaching drivers with targeted and tactical messages that tap into their mindset in that moment.”

The campaign was run in 2017, and in the years since (inspite of the global pandemic) Richardson has been developing the capacity for similar (though not yet programmatic) ad campaigns to be run in Sri Lanka. Our digital LED gantry advertising enables companies to effectively reach commuters with dynamic campaigns. And our ability to analyse traffic data at a granular level allows advertising to be more targeted than ever before in the country.  It’s easy to change messaging to reflect seasonal promotions or to connect with customers by addressing topical situations.